Valve have released their third and final announcement for the Steam Controller, a new proprietary controller. 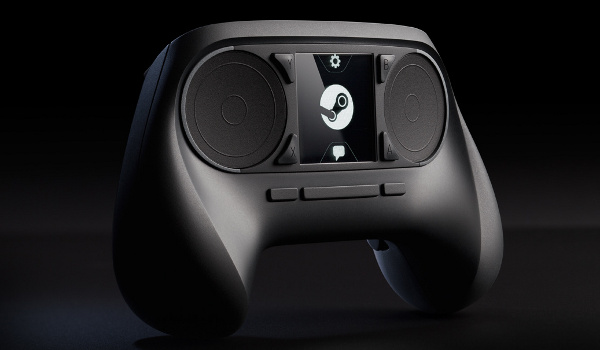 The controller is unique in employing dual trackpads as opposed to the more traiditional dual analogue sticks:

Driven by the playerâ€™s thumbs, each one has a high-resolution trackpad as its base. It is also clickable, allowing the entire surface to act as a button. The trackpads allow far higher fidelity input than has previously been possible with traditional handheld controllers. Steam gamers, who are used to the input associated with PCs, will appreciate that the Steam Controllerâ€™s resolution approaches that of a desktop mouse.

Whole genres of games that were previously only playable with a keyboard and mouse are now accessible from the sofa. RTS games. Casual, cursor-driven games. Strategy games. 4x space exploration games. A huge variety of indie games. Simulation titles. And of course, Euro Truck Simulator 2.

In addition, games like first-person shooters that are designed around precise aiming within a large visual field now benefit from the trackpadsâ€™ high resolution and absolute position control.

Another innovative feature is the centralised touchscreen: In the center of the controller is another touch-enabled surface, this one backed by a high-resolution screen. This surface, too, is critical to achieving the controllerâ€™s primary goal - supporting all games in the Steam catalog. The screen allows an infinite number of discrete actions to be made available to the player, without requiring an infinite number of physical buttons.

The whole screen itself is also clickable, like a large single button. So actions are not invoked by a simple touch, they instead require a click.

Another feature includes specialised haptics within each touchscreen:

This haptic capability provides a vital channel of information to the player - delivering in-game information about speed, boundaries, thresholds, textures, action confirmations, or any other events about which game designers want players to be aware. It is a higher-bandwidth haptic information channel than exists in any other consumer product that we know of. As a parlour trick they can even play audio waveforms and function as speakers.

A bold move from Valve to try and reinvent the controller and make it more accessible for traditional mouse-based games. However I'm a little bit confused about how the controller will function with Xbox/PlayStation titles, especially as the 8 face buttons are effectively gone (4 D-pad buttons, 4 face buttons) and have been replaced by the centralised buttons near the touchscreen. Many games may require extensive remapping for them to work as intended, which defeats many of the plug and play advantages of say, using an Xbox 360 controller.