Valve announce own SteamOS hardware for 2014 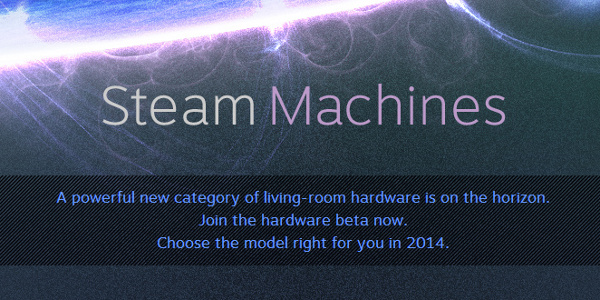 Valve have announced that they will enter the hardware space in 2014 with their own SteamOS device. Not only are Valve creating their own device, they have also announced a new range made by third parties which they are calling Steam Machines with the choice of "multiple SteamOS machines to choose from, made by different manufacturers".

Valve are keeping details of their prototype close to their chest, and we can only speculate as to what kind of specifications it will have. They merely mention that "there will ultimately be several boxes to choose from, with an array of specifications, price, and performance."

300 of the prototypes will be made available to the public for those who wish to participate in a beta test. The deadline for this is October 25th, and requires the completion of an 'Eligibility Quest'. As it stands, it's a lottery as we expect hundreds of thousands, if not millions, to sign up. If the PCGamingWiki community could all try and get on board, we might have a chance of getting first-hand impressions of the device.