First in the series of planned announcements, Valve has announced SteamOS,

SteamOS is a brand new operating system based on Linux that's designed to be used in the living room.

New features to SteamOS and Steam include: 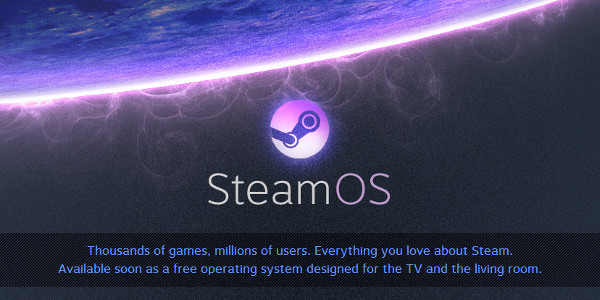 Local streaming is a clever way of circumventing the issue of compatibility with the vast library of non-Linux Steam games. The tech exists and it's solid - it's comparable to the WiFi streaming function of an Nvidia Shield (hopefully without the ridiculous tech requirements) or the streaming capability of the PlayStation 4 and Vita, where a beefy base unit can be used to stream high fidelity games to other devices at low latencies.

Weâ€™re working with many of the media services you know and love. Soon we will begin bringing them online, allowing you to access your favorite music and video with Steam and SteamOS.

Another interesting feature that may put the (yet unannounced) device in competition with other devices like Apple TV, Roku and of course the media functionality of the Xbox One and PlayStation 4. I wonder if Valve have the clout to incorporate major streaming companies like Netflix from launch.

In the past, sharing Steam games with your family members was hard. Now you can share the games you love with the people you love. Family Sharing allows you to take turns playing one anotherâ€™s games while earning your own Steam achievements and saving your individual game progress to the Steam cloud.

A feature that has already been announced, but it would be great to hear more specifics about how this works. My biggest hope is that it'll now be possible to be logged into a single Steam account in more than one place - no more logged in and out of accounts just to jump between two different computers, a little bugbear of mine.

The living-room is family territory. Thatâ€™s great, but you donâ€™t want to see your parentsâ€™ games in your library. Soon, families will have more control over what titles get seen by whom, and more features to allow everyone in the house to get the most out of their Steam libraries.

Again, it would be wonderful to get more details on this. My son will be coming to the age and will be wanting to play PC games. Being able to share games between would be fantastic, instead of having to setup a brand new account and potentially doubling up on purchases. And the possibility of creating a PCGamingWiki 'family' account for testing purposes is an intriguing proposition.

Whilst the big announcement here is SteamOS the Linux platform, I don't think this is the real news. Valve have thrown their weight behind Linux, but we have yet to hear of other major third party support in the 'AAA' arena announce simultaneous multiplatform Linux game releases in the near future. Until third-party Linux support gains more traction, it'll be tough to maintain a Linux-only gaming environment, especially if this means ditching support for the enormous PC gaming back catalogue on Windows and Mac.

Thankfully we'll be able to maintain compatibility with Windows and Mac games by streaming them from another PC. For me, this is the really big news - being able to maintain whatever OS I want my HTPC, and stream games from my main beefy desktop. Or - maintain a single 'game server' running Windows, and stream to multiple low-end devices, e.g. a low-price HTPC, a netbook, etc.

Of course the next announcement is likely to be something to do with the specific hardware of the oft-rumoured 'Steambox'. Any guesses as to what this will look like? My bet is on multiple pricepoints, with one being a budget streaming box similar to the PS Vita TV, and one being a hefty gaming HTPC similar to the Xi3 Piston, both running SteamOS.