Port Reports are a new series of quick first impressions of the technical aspects of a PC game. This report was written by PCGamingWiki contributor LDK. For an up to date account of Shadow Warriors' fixes and improvements, please visit its respective PCGamingWiki article.

Shadow Warrior is a reboot of a long forgotten FPS action game of the same name from year 1997. This new version is developed by Flying Wild Hog, and they are aiming to be faithful to its predecessor, bring back old school design with emphasis on fast-paced shooting, lots of enemies, no cover mechanics and many weapons available all the time. This article will look at the technical aspects of the game, mainly performance, options and overall technical quality. You will also find several benchmarks for every performance heavy effect so you know how to set your game to run perfectly. Shadow Warrior is being released on September 26th, 2013 for Windows, and will be available through several digital distribution channels, including Steam and GOG.com. 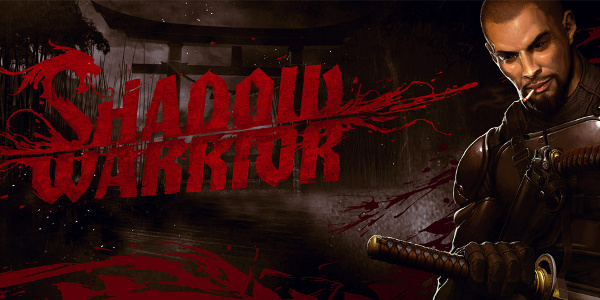 Testing was done on a system with Core i7 clocked to 4.5 GHz, 32 GB RAM and an AMD Radeon HD 6870 in 1920x1200 resolution. Download size is slightly under 7GB, with the same amount of space occupied on the HDD.

Shadow Warrior is based on the Road Hog Engine developed by Flying Wild Hog studio. It was used in their previous game, Hard Reset, and it is making a return with some tweaks and new effects. There is no launcher and everything can be set directly from the game without restarting, something that is not very common and developers deserve to be praised. Menu and its content is very similar to the last Road Hog Engine game with the addition of two new effects - ambient occlusion and mirrors, which will be talked about later in more detail.

This menu features a lot of settings that will make every PC enthusiast happy. If you feel overwhelmed, feel free to use one of four preset setting: LOW, MEDIUM, HIGH and ULTRA.

Shadow Warrior features a vertical field of view slider with a default value of 65 degrees, going up to 90 degrees. As this is vertical field of view implementation, this range should be enough even for multi-monitor setups. Unfortunately there is no field of view entry in the configuration files, so you can't set it manually. This may be related to the issue that field of view setting is not saved between sessions, so you will have to set it every time you start the game. But this probably will be fixed later, as we had an early copy of the game.

The game seemed to me rather well optimized, with some very performance hungry effects. Performance scales properly between each preset, in order to cover most of the different systems. With the LOW preset, you can get even higher FPS if you turn everything completely off, as some effects are just set to LOW.

The game is very dependent on graphics card and CPU speed does not matter that much. On my system CPU utilization was around 8% (apart from more common 12-15% that single threaded games usually use), with one main and one secondary thread. GPU utilization was at 95% and more all the time, with the exception of loading screens and menus. VRAM was nearly full (950MB) and for advanced effects (AO, AA) you'll definitely need more than 1GB of VRAM. System memory use was more subtle, with the game taking around 1.5GB of RAM

The game has three different anti-aliasing solutions (and an option to turn AA completely off, of course). Nowadays very popular blur filter aka FXAA is here as a recommended setting as it has the least performance impact (around 2%) but you will lose some sharpness on the textures. Next is first proper anti aliasing - FSAA 2x. Sacrificing around 30% performance you'll get basic edge smoothing. Last but the best is FSAA 4x that will cost you roughly 50% of performance.

As you can see, performance drop is significant but quality is comparable with FXAA method of anti aliasing. You will sacrifice a little bit of texture quality by choosing FXAA but gain considerable performance boost. See comparison of each method:

Screen space ambient occlusion is a new feature in Road Hog Engine and, as usual, there is a significant frame rate drop when you enable it. The game offers four setting, going from OFF to ULTRA, but no preset uses OFF so change it manually if you have problems with the frame rate.

Between OFF and LOW there is a considerable drop in performance - around 10%, after that each option will cost you another 2-5% until you get to ULTRA, where you lose another 20-30%. Recommendation is to set it to HIGH, unless you have performance to spare.

In the past, shadows were one of the performance killers. This is not the case anymore, and in many current games shadows do not have large impact on the frame rate, and Shadow Warrior is not an exception. You can set shadows to one of three levels - LOW, MEDIUM and HIGH, where each step will mean 1-5% drop in FPS.

Brand new effect that is rarely seen in current generation of games. It basically creating real time reflections effect in glossy surfaces like a water surface, blood pools and metallic objects. Because game has to render much more of the game scene, performance drop is rather significant - 25-35% and is enabled only in ULTRA preset, unless you set it manually. There is no fine tweaking and you can just turn this effect on or off.

I've run into some problems with this effect causing flickering of reflections. It will be probably fixed by developers or in drivers in the future so if you see flickering of water surface, turn Mirrors off and wait for a fix.

Shadow Warrior supports game pads and classic mouse and keyboard combo. Mouse does not have acceleration even if you have it set in you OS, you can set its smoothing, sensitivity and inversion though.

Tip: see our Mouse acceleration article to learn difference between smoothing and acceleration.

Actions on the keyboard can be rebinded to your liking with two keys assigned to one action.

Xbox 360 controller is supported from the get go and you can tweak sensitivities, aim assist, inversion and vibrations. Under layout you will find what action is binded to what button and set left-handed mode for sticks and buttons, triggers layout can be set to reverse. Hot plug is also supported.

The game supports auto-detection of speaker configuration from your OS and its result is shown under Audio options. I haven't got any problems with it, the game correctly detected all my speakers and started using them properly. If you encounter problems, you can force stereo mode. Apart from this there are three volume sliders for global, music and voice. Subtitles can be found under Game Settings menu.

A long lost feature called quick-saving is back! The game lets the player save anywhere they want, even in the middle of combat. There is also checkpoint system that works very well and maps your progress through the game. All saves are accessible via the Load game menu and all saved games are divided by difficulty and chapter to avoid clutter.

Shadow Warrior is a fine example of how a PC release should look like. The game features plenty of options for players to fiddle with, field of view slider included, and performance problems can be easily solved by turning some demanding effects down or completely off. I haven't run into serious technical issues and apart from few nuisances the game runs as it should.

Port Reports are a new series of quick first impressions of the technical aspects of a PC game. This report was written by PCGamingWiki contributor LDK. For an up to date account of Shadow Warriors' fixes and improvements, please visit its respective PCGamingWiki article.