Port Reports are a series of quick first impressions of the technical aspects of a PC game. For an up to date account of Saints Row IVâ€™s fixes and improvements, please visit its respective PCGamingWiki article.

Saints Row 2 was an infamously bad PC port that suffered from random massive frame rate drops, buggy gameplay, frequent crashes, low sound quality and lacked any of the DLC released on Xbox 360. By contrast, Saints Row: The Third was a more well-rounded PC port, although it did not escape its share of issues. This included poor performance on AMD or ATI based systems (somewhat ironic given that the gameâ€™s title credits were plastered with the AMD logo).

When I approached Saints Row IV, I was slightly fearful that weâ€™d see a return to the game-breaking Saintâ€™s Row 2 bugs â€“ largely because the developers Volition have moved home to Deep Silver, a publisher with a history of producing notoriously buggy PC ports like Dead Island and S.T.A.L.K.E.R. However, many of these fears can be put to rest because the game feels relatively polished â€“ largely thanks to the fact that it uses virtually the same engine as Saints Row: The Third. In fact, they are so similar to each other that they look virtually identical in places, and even the same field of view hacks work in Saintâ€™s Row IV as well. 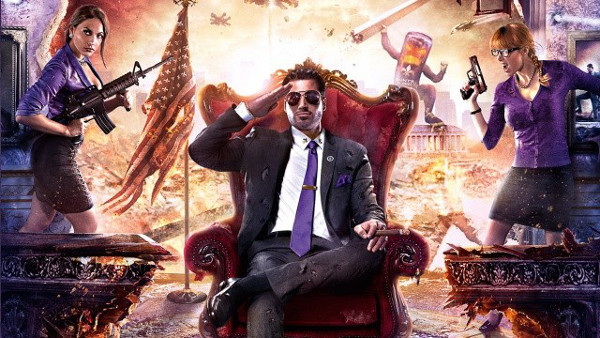 Note: Testing was done on an Intel/NVIDIA system, and I am therefore unable to comment on any issues that users of AMD based systems may encounter. Furthermore, the game uses a distortion rendering effect, which may appear in any screenshots, and is the way it is intended to look.

The game has generous system recommendations â€“ a minimum video card requirement of the five-year-old NVIDIA GTX 260. A minimum OS requirement of Vista is now commonplace amongst new releases.

Saints Row IV uses Steamworks, all versions are locked to a single Steam account, regardless of where the game was purchased. I was unable to test Steamâ€™s matchmaking and multiplayer on this pre-release build.

Saints Row IV offers a decent number of video settings. They can be customised by preset (ultra/high/medium/low), or individually if the player desires more control. Support for borderless fullscreen windowed mode stands out, as does the auto-detect function, which worked well enough for me and provided a good performance-quality compromise.

Saints Row IV is a pretty game on any video card, even if quality suffers in some areas. Vehicle models are one area which could see significant improvement. A number of models have barely changed since SR2 hit the shelves (nearly five years ago now), and these stick out against the newer models introduced in Saints Row: The Third and IV.

Similarly, during close-ups quite a few textures appear blocky and blurry regardless of what video settings have been selected. This is likely a result of visual elements being borrowed from the third and second games. Make no mistakes, Saints Row lacks the kind of visual polish present in comparable bigger budget games such as Grand Theft Auto, but that was never really part of the seriesâ€™ appeal anyway.

However, the game looks best at night, when a number of special lighting effects become more obvious â€“ this is one area where running the game on low will make your experience suffer as the neon lights and building detailing really help to build the atmosphere and the environment. By contrast, when seen from the air whilst making use of your â€˜superpowersâ€™, Steelport looks great whether its running on a low-end laptop or a high-end gaming PC, and the frame rate remains surprisingly stable considering how quickly vast distances can be covered, as well as how quickly you can transfer into explosive ground-based combat.

Once again, another developer has decided that it would be a good idea to encrypt their settings files, when there is no reason to do so. Whilst there is no field of view setting within the game menu, it certainly does exist as a variable in their encrypted settings. Surprisingly, an FOV mod developed for Saintâ€™s Row: The Third actually works in exactly the same way in Saints Row IV.

And as you can see in the above comparison, there is quite a stark difference in having a wider field of view, feeling much more open and comfortable for PC gamers who sit close to their displays. Some people claim that an adjustable field of view is not essential for third person action games like Saintâ€™s Row IV, but I would argue that PC gamers should always be given the option. In this case, there is no excuse â€“ the variables are there in the files, but we are unable to access them without special tools (specifically the Gibbed mod tools).

To install this field of view mod, download saints row iv fov mod.zip. Unpack the .zip which will reveal the camera_free.xtbl file, and extract it to the root game folder, most commonly located at C:\Program Files\Steam\steamapps\common\Saints Row IV\. If you use a different directory to store your Steam games, look there instead.

Enabling ambient occlusion has a significant impact on the atmosphere of the game, and makes it far more visually appealing. Environments seem more real, and structures and objects are given more depth. Frame rates arenâ€™t really affected either.

Increasing the anisotropic filtering setting hits the frame rate hard with little visual payoff. Personally, the same could be said for the anti-aliasing setting, and in such a fast paced game, I found it difficult and irrelevant to distinguish between the 2X MSAA and 8X MSAA settings.

Audio settings are fully-featured, if spread out amongst the various menus. Within the audio settings menu itself, volume levels can be adjusted individually, and voice chat can be set up. Within the gameplay menu, full subtitles (no closed captions available) as well as mute on focus lost can be enabled.

The audio itself is of a high quality (a stark contrast to that of Saintâ€™s Row 2), and the game also allows players to mix their own radio station with a number of tracks.

To its credit, Saints Row IV fully supports both keyboard and mouse as well as controller setups. I ran the game using the Xbox 360 controller for Windows, and the game auto-detects a controller input and swaps all the icons for you.

I did encounter an issue whereby moving the mouse with the controller plugged in would confuse the game and cause it to flick icons rapidly between keyboard keys and controller buttons for the rest of the session; and this was especially annoying during the gameâ€™s many quick-time-events. As far as I could tell, the only way to resolve this issue is to restart the game.

Both keyboard and controller setups have fully rebindable inputs, which allows you to tailor the gameâ€™s controls to your requirements. These options are very complete, and the game provides sub-menus for when you are on foot, in car, etc.

I ran into a couple of stability issues when playing, most notably game crashes. I had these twice in about 12 hours of play, and because the game doesnâ€™t save mission checkpoints (even if manually saving), it required restarting the current mission. Outside of missions, the game frequently autosaves, which means a crash isn't so irritating.

Similarly, I also had an issue with the game hanging on the loading screen after the first mission, finding myself unable to continue play. After a full system restart and a game file verification through steam, this issue seemed to resolve itself though.

Overall, Saints Row IV provides a good experience for PC gamers. It has basic issues with crashing and controller support, but its combination of original and fast-paced gameplay, good graphics (bar a few outlying vehicle models) as well as a fully-featured open world make it a hard game to pass up.

Aside from a few flaws, I find myself with little that needs â€œfixingâ€ in Saints Row IV. Volition have done a great job in delivering an equal (and even superior with the upcoming mod support) experience on PC as can be found on console.

For an up to date account of Saints Row IVâ€™s fixes and improvements, please visit its respective PCGamingWiki article.