An image of a supposed email from Steam Promotions has been posted on the Internet, revealing dates and specifics of the Steam Holiday Sale as well as an Autumn Sale. 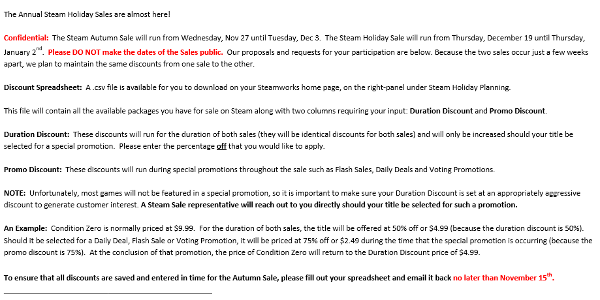 A post on Reddit claims to have a leaked the dates of two upcoming Steam sales, including the awaited Holiday 2013 Sale.

The post contains an image of an email to a developer from Valve that has supposedly revealed the dates of the upcoming sales for this year.

According to the email, the Autumn Sale will begin November 27th through December 3rd. The Holiday Sale will occur from December 19th through January 2nd.

The two sales will have the same discounts due to the close timing.

Unfortunately, this has not been confirmed as official yet.